Sidrome
Home News Want to be a freelancer? Here are 3 steps how to start...

The majority of the U.S. workforce will be freelancers by 2027. That mind-blowing prediction comes from the new Freelancing in America: 2017 report, conducted by the Edelman Intelligence research firm and commissioned by the Upwork freelancing platform and Freelancers Union.

Odds are, you’ll want to know how to become a freelancer, either full-time or part-time and either as a side gig while you’re holding down a full-time job or as a way of earning income in retirement. I’ll offer three suggestions in a minute.

The Freelancing in America: 2017 study surveyed 6,000 U.S. workers (freelancers and non-freelancers) to analyze the growing freelance economy and the role it plays in the future of work.

Of course, no survey can predict exactly how many people will be working on a temporary, contract or project basis 10 years from now. And even determining how many people freelance today is tough; statistics on the freelance economy are notoriously elusive. But this report’s findings leave little doubt that we are rapidly barreling towards a freelance-based workplace — and the sooner you prepare for that shift, the better.

A few fascinating findings from Freelancing in America 2017: 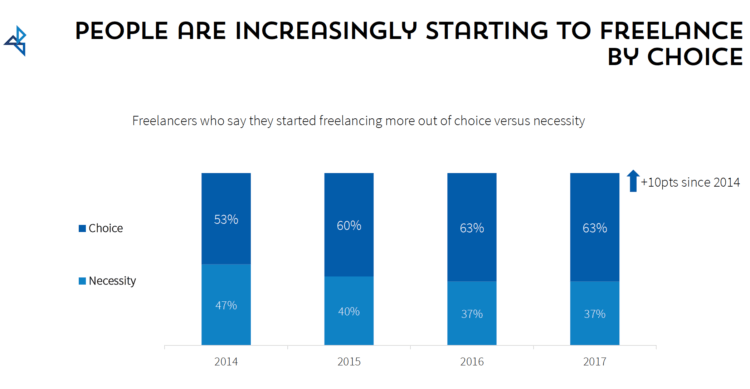 This doesn’t mean freelancing is a perfect work solution, though. The triple whammy of unpredictable work assignments, fluctuating cash flow and the challenge of securing and paying for health insurance is still a major obstacle for many freelancers (although most freelancers surveyed believe the Affordable Care Act has helped them and prefer Congress keep it). Worth noting: 63% of full-time freelancers dip into their savings at least once a month; just 20% of full-time non-freelancers do.

So how can you best prepare for the possibility that you may be freelancing at some point? Here are three tips culled from the survey results:

1. Update your skills regularly. If the last time you learned a new skill or technology was over six months ago, you’re losing ground. An impressive 55% of freelancers updated their skills in the last six months; by contrast, only 30% of non-freelancers did.

So before year-end, make it a priority to take advantage of any company-sponsored training, workshops or tuition reimbursement you can get. If that’s not an option, look into online courses and community college offerings for affordable training options.

2. Seek out work assignments that diversify your capabilities and make you more valuable. You may now have a job that seems automation-proof, but nearly half of freelancers say robots and artificial intelligence have already impacted their work. And 77% of full-time freelancers expect at least some of their work will be done by robots or machines within 20 years.

You just never know how or when technology might encroach on your job. Whenever possible, look for opportunities to take on responsibilities or even side gigs that diversify your skill-base, industry expertise or technology prowess.

3. Step up your networking, both online and off. While freelancers are finding more work online, their biggest source of leads are family and friends, followed by professional contacts (81% combined). That percentage mirrors the oft-quoted statistic that 80% of new jobs are found through networking. Regardless of whether you go out on your own, you’re well served to make networking a priority.

The survey also listed social media as the third most popular source of leads for freelancers. That’s a helpful reminder to take at least a few minutes each week and check in with your professional network on LinkedIn or Twitter. You never know when those connections might lead to an exciting new opportunity, perhaps in your future life as a freelancer.

How to hire freelancers that will boost your business

Want to be a freelancer? Here are 3 steps how to start freelancing

Want to be a freelancer? Here are 3 steps how to...